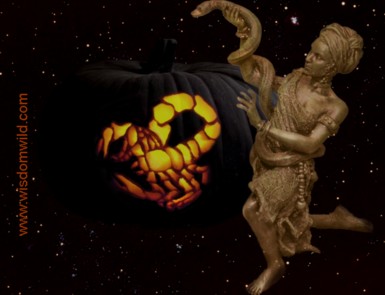 We are moving in deep, emotionally intense times (Sun-Moon-Merc, all in Scorpio + Neptune in Pisces & Chiron too) and increased sensitivity (Moon conjunct Mercury) .

Such energetic flows ripple through, and also fuel, a challenging dance underway as old oppositions seek to hold on, and new ways rise up to birth through (recent Mars-Uranus square + Mars & Pluto both in Cap, the sign of our cultural collective. Mars preserving what may still be useful; Pluto striking down rotten and dangerous structures.)

The powers are immense for transformational healing, transmutation and new creation.

Moon has called us to clear, cleanse, and release, release, release (ref last weeks message). Dark-new in Scorpio she calls us into our magick, powerfully present and aware. It is time to wrestle with the Serpent and mistress her powers to shed what must be released, and transform what passes away in ways that invite new forms to emerge.

It is time also to bring into laser focus, the dreams, visions, values and ideals we seek to be expressed in form. Lean into enhanced imagination, intuition, and open flowing connection to natural rhythms and Source/Spirit (Sun-Moon-Mercury trine Neptune) . Step into the thinning veils (Hallow’s Eve, All Soul’s Day, upcoming crossQuarter) and listen for wisdom held by all those that have gone before. Choose now the sacred seeds to plant and nourish under Moon’s waxing Light.

Holding these great dreams, visions and ideals
Bring forth faith and courage to make them real